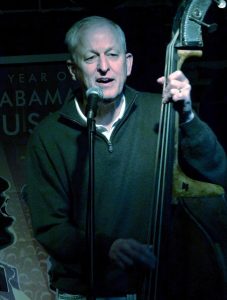 Andy Meginniss played bass, guitar, and handled lead and harmony vocals as part of Three on a String from 1972 to 1985. During his tenure, the band traveled extensively, playing festivals, clubs and concerts, and recorded four albums.

In 1985, Andy joined with Claire Lynch, Larry Lynch and Herb Trotman in the Front Porch String Band. This collaboration lasted eight years and culminated in the critically acclaimed album Lines and Traces in 1991. At the same time, he partnered with a couple of old friends, Stan Putnam and Dan Lakeman, in the acoustic trio Rosewood. This group recorded one self titled album, and they continue to play together. During this period, he also teamed up with his brother, performing with two others in the musical Cotton Patch Gospel for 25 years.

In 1993, Andy became the guitar player and lead vocalist for The Herb Trotman Band, a bluegrass ensemble that performed steadily until 2012. In 2011, he was inducted into the Alabama Bluegrass Music Hall of Fame, and in 2012, he rejoined Three on a String, which celebrated its 50th anniversary in August, 2021.

Andy is married with two grown children, and lives with his wife in Homewood, Alabama.