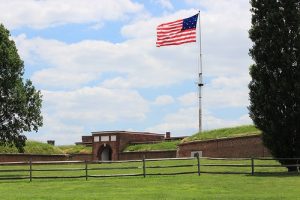 SATB Voices and Keyboard, with Optional Audience/Congregation, Orchestration, and Narration

In 1814, a young lawyer named Francis Scott Key was aboard a British prisoner of war ship in Baltimore Harbor to negotiate the exchange of British and American prisoners. While aboard, he realized that the British were going to wage one more attack on Fort McHenry, and he was not allowed to get off the ship. He experienced the attack with the prisoners, aboard the ship, and when the attack, fog and smoke cleared, he disembarked, and went home to Baltimore. He immediately penned the words of our National Anthem, approved as such on March 3, 1931 by Congress. This powerful SATB arrangement celebrates the bravery of key military personnel who put themselves in harm’s way, and those who speak up with integrity, regardless of the consequences. We celebrate the gift of being able to raise our voices as we participate in democracy. This arrangement begins with the second verse of the anthem, establishes the mood of that perilous night in 1814, and includes a narrator. Celebrate bravery! Celebrate courage!